a verdict is in

Mark Goodacre has published a short paper by Francis Watson, entitled "The Gospel of Jesus' Wife: How a Fake Gospel-Fragment was Composed." This will almost certainly not make the Huffington Post or the New York Times; it certainly won't be the subject of a special by the Smithsonian. 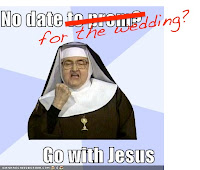 So even my [*ahem*] judicious assessment that we might genuinely have "a new text that gives us a frustratingly brief glimpse of what some people in the (second? or) third century were saying about Jesus" appears to have been too naïve. All we have really have, in fact, is another forger's attempt at fame and/or riches, a scholar's frustrated attempt to publish something genuinely new and unprecedented, and a Jesus who went stag to a wedding in Cana.
Posted by Rafael at 8:41:00 AM

I don't think the matter is settled yet. Here's a link to a post on my blog about why I don't think Watson's treatment should be considered definitive: http://www.patheos.com/blogs/exploringourmatrix/2012/09/is-the-gospel-of-jesus-wife-a-fake.html

I don't disagree, James. I think Watson's argument is an important verdict, but yet the definitive verdict.